Stocks spent last week yo-yoing on trade headlines, just like they have been during the entire month of August.

Tomorrow the country celebrates Labor Day, but then it’s back to business as usual…

I’m sure you’ve all heard the old tale about stockbrokers and fund managers packing up on Memorial Day weekend and heading to the Hamptons, not to return until after Labor Day.

And while trading volume is often lower in the summer months, that hasn’t been putting a dent in profit opportunities — at least not here at Daily Profit Machine.

Growing your portfolio 14,800% in just over three months’ time may sound unrealistic, but my Twitter account is flooded with notes from traders like this who’ve been raking in cash all summer from my Trade Of The Day.

Just check out the profits that could have been yours based off my alerts (if you timed the trades perfectly and sold at the top). 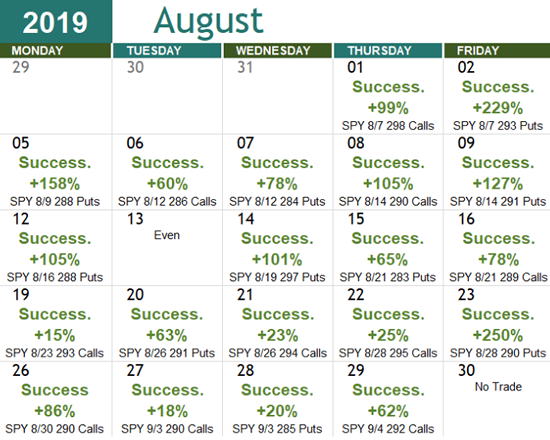 There’s no doubt in my mind the month of August was a tough slog for many traders.

Despite last week’s gains, the broader market finished nearly 2% lower as many institutional traders fled from stocks and into safe havens like gold and U.S. Treasurys.

But safe havens aren’t going to net you returns like the ones shown above… which means there’s a better way.

Let me show you an example of what I exactly mean…

Thursday’s Trade of the Day in Action

For those who are unfamiliar with it, my Trade Of The Day represents the single option trade I believe is the best bet for your money on a given day.

Now, in order select my Trade of the Day from the thousands of options out there, I wake up at 3 a.m. each day to analyze pre-market action.

Over time, I’ve honed a three-step process to which I attribute my immense success:

After I have narrowed down my Trade Of The Day, which includes the exact strike price and expiration, which I deliver to members 30 minutes prior to the market open.

It awards them enough time to prepare and execute, even if they work a 9 to 5.

So, let’s break down each of these steps as they relate to Thursday’s trade.

What happens in the Asian and European markets is typically mirrored here in the U.S.

And as I fired up my trading screens Thursday morning, I noticed things were very green in Europe — I’m talking +1% or more across the board.

Interestingly, things were flat in Asia. I say interestingly because these markets often trade in tandem.

But with the China trade war in-play, you can expect the relationship to decouple.

But despite that, the overseas action was telling me that U.S. markets will open higher.

On Thursday, the second-quarter GDP estimate was scheduled to be released at 8:30 a.m. ET…

But the big news of the day, of course, was that China wanted to discuss removing the latest tariff… rather than escalating the conflict any further.

Also, trade representatives from the U.S. and Beijing were considering a meeting to resolve matters in September.

The market’s reaction to the news was positive, as evidenced by the futures pointing higher here in the U.S.

That was another check in the bulls’ column for the day.

Now, on Wednesday, SPY’s chart showed a hammer candle, which is a bullish reversal pattern.

This type of candlestick is formed when a security trades well below its opening intraday but then rallies back to close near the opening price.

Given this bullish candle, along with the fact that SPY was trading above some major simple moving average lines (20-day, 100-day) that were resistance the prior day, it was hard for me to bet against markets going higher.

Therefore, I was going with a call option applying an inverse head and shoulders — my favorite pattern for timing bullish trades. If you’re not familiar with this pattern, you can learn more about it here.

The chart below shows a perfect inverse head and shoulders formed right off of $291 support. 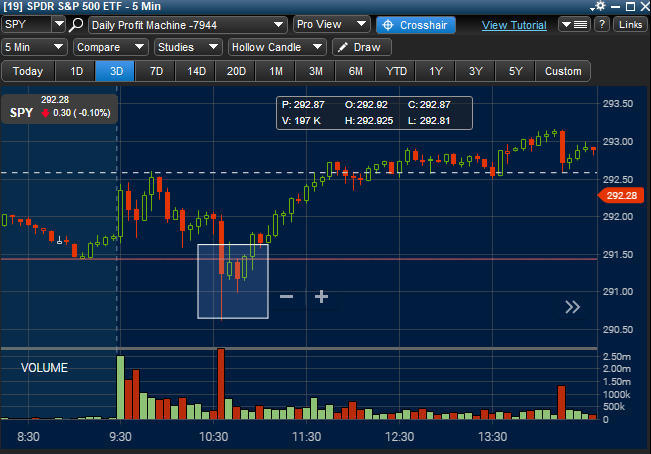 As SPY rallied from this bullish reversal pattern, those who got my Trade Of The Day call option alert had a chance to book up to a 62% profit in only three and a half hours.

Keep in mind that SPY was up about 1.3% that day. So, this trade is a testament to the leverage options afford traders — at least those who have a profitable system that can be used to generate consistent profits.

The Trading Week Ahead: What I’m Watching

Looking to the week ahead, markets are in a bit of a tricky spot after having moved up quickly on tariff news. No one wants to get caught on the wrong side if it decides, “Oops, just kidding!” and reverses lower.

To help avoid this, it will be important to keep an eye on key technical levels.

In the chart below, I have drawn SPY’s 50-day simple moving average line in red and the 100-day SMA in yellow. The 100-day is key support heading into next week, while the 50-day will be key resistance. 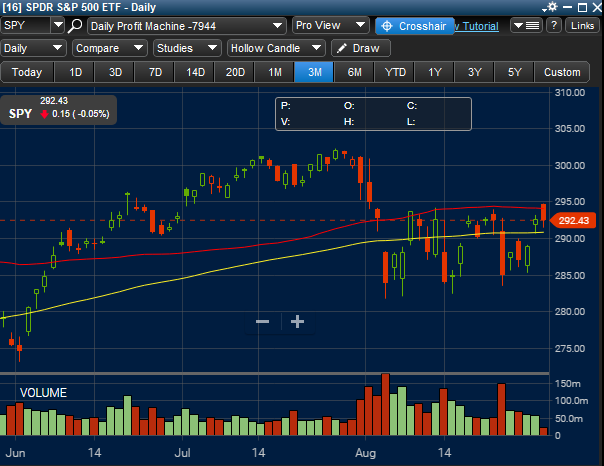 If SPY can break through its 50-day SMA, there is room for a gap up to the $300 level. If it does, this may be a good place to take profits depending on what the charts are telling us at that time.

Conversely, if SPY fails to hold its 100-day SMA and breaks to the downside, we could see a drop to the $285 — another support level established during August’s volatile trading.

Of course, I’m not concerned about further downside. As this month has proved, there are huge profits to be made on down days.

Join me now so you can get Tuesday’s Trade of the Day in your inbox along with a daily market roadmap.

To make it even easier, I’ll alert you by text as well!