How To Use Bonds To Predict Market Moves

We’ve seen this before… in fact, inverted yield curves preceded some of the biggest financial crises…

… and this time, it doesn’t look any different.

The inverted yield curve strikes fear into the hearts of traders… because they know what’s to come… a potential downturn.

… and the talking heads don’t help to calm investors and traders… instead, they play into the “fear” game because it makes for a great story.

Although I focus on one single trade in the SPDR S&P 500 ETF (SPY) every day, it doesn’t mean I’m not looking at the bigger picture from time to time… because that’s what can affect my trading.

Today, I’m going to tell you why the yield curve is important and how I use bond market activity to predict market moves.

What Is An Inverted Yield Curve?

In “normal” times, longer-term bonds offer higher yields than short-term bonds because they require investors to tie up their money for a longer amount of time.

But when investors start to get nervous about the economy, they are more likely to buy 10-year Treasurys so they can benefit from their (typically) higher yields.

This increase in demand, however, causes prices on 10-year Treasurys to rise. Since bond prices move inversely to yields, this results in a decrease in the yield on the 10-year note.

This decreased demand leads to lower prices and a higher yield on these short-term bonds.

And that, folks, is how inverted yield curves are made.

It might be a bit complex to understand how the yield curve operates… but the only thing you should care about is how they’ll affect stocks.

What Does An Inverted Yield Curve Mean?

The news media sounded the alarm and stocks went screaming lower. The Dow shaved off 800 points in a single session in its worst one-day performance thus far in 2019.

An inverted yield curve is a signal that there could be an economic downturn in the foreseeable future… and it makes investors jumpy, causing them to hit the panic button and dump their holdings and look for safe-haven assets.

But as short-term traders, we don’t have to worry about that… in fact, you can actually take advantage of the price action.

For instance, as stocks were plummeting on Aug.14, my strategy could have landed you up to 101% on a single trade.

How bad is the inverted yield curve for markets really?

For starters, the current bull run is more than 10 years old and the longest in market history.

What goes up must come down… eventually, right?

And we’re currently facing a number of headwinds that could send stocks into a downward spiral — e.g., slowing global growth, trade wars, actual wars, more hawkish monetary policies (or the fear of them).

What’s really got everyone scared, though, is that the past seven recessions were preceded by an inverted yield curve.

Since the yield curve inverted in mid-August, long-term Treasury yields have continued their slide. What’s more, the 30-year Treasury bond’s yield closed below the 3-month Treasury Bill’s yield for the first time since 2007.

However, from the time the yield curve inverts to the time a recession hits takes an average of 22 months, according to Credit Suisse. And stocks tend to do well for another 18 months following the inversion.

That’s a long time from now… far too long to be sitting on the sidelines.

However, there is a way to profit from this signal.

Now, as I mentioned earlier, my trading strategy could have allowed you to more than double your money on a single trade on the day the yield curve first inverted.

A week and a half later, as stocks and bond yields took another dive on escalating trade tensions, my strategy could have landed you as much as 250% — in a single day.

My point is, this is still a traders’ market and there is plenty of money to be made no matter what the short-term or long-term repercussions of the inverted yield curve.

What’s more, traders can use the bond market activity as a helpful gauge to guide their stock and options trading.

How I Use Bonds To Guide My Daily Trading

The gap up at the open on Aug. 27 probably had many traders thinking we were in for a continuation of the prior day’s gains. But something caught my eye in the premarket and it had to do with bonds.

The iShares 20+ Year Treasury Bond ETF (TLT) tracks the U.S. Treasury 20+ Year Bond Index, which is designed to measure the performance of Treasury bonds that mature at least 20 years from now.

On Aug. 27, TLT was testing the same area it was trading at when people first started to panic about yield curves back in mid-August — when stocks suffered their worst day of the year so far. 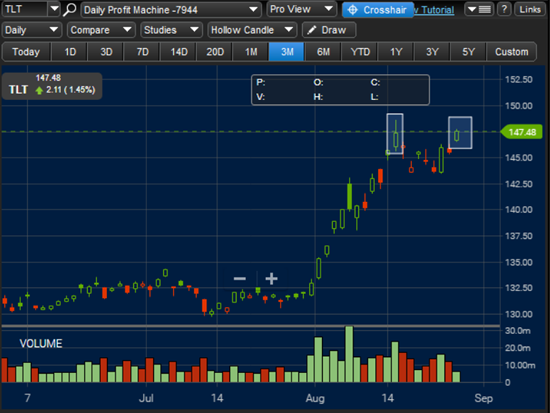 When the opening bell rang, SPY — the ETF that tracks the S&P 500 and my trading vehicle of choice — rejected resistance at its 20-day moving average near the $290 level (a level I’ve mentioned several times in these pages) and reversed lower.

About 30 minutes later, CNBC sent out a notice that markets had turned red as a result of a “bond-market recession indicator.” You guessed it; they were talking about the yield curve inversion!

Going forward, I expect to see more days where stocks sell off on fears about yield curves and a pending recession. But that’s not going to stop me from trading — and it shouldn’t stop you either.

The bright side of these sharp down moves is that they provide amazing profit opportunities. I’ve actually found that traders make more with my strategy in red markets. That’s because markets tend to fall faster than they rise — they take the stairs up and the elevator down.

If you’re interested in finding out how, you can learn more here.