That’s why it’s important to stay nimble during these volatile and uncertain times.

Some people may call this indecision or confusion, but I call it reading the field and knowing how to place my trade.

Think of it like a quarterback in the NFL… if they read the field and see defenses lining up in an unexpected pattern,  they will call an audible and get back on the right side of the play.

And that’s how it goes with trading.

You are the quarterback of your own trading account and if you see something in the markets you don’t like, call that audible and get on the right side of the trade!

Now, let’s take a closer look at how calling an audible on your strategy can keep you ahead of the markets.

Yesterday was an extremely difficult market to trade with the type of price action we saw hitting the tapes.

To start the day in the pre market session, we were facing a lot of bearish trade signals on the SPY from the E-Mini futures.

Here is a rundown of the SPY in pre market:

Premarket momentum indicators were all pointing to a negative market but it’s too early to tell what the day will bring.

Now let’s see what the markets think about this in the pre market trading session. 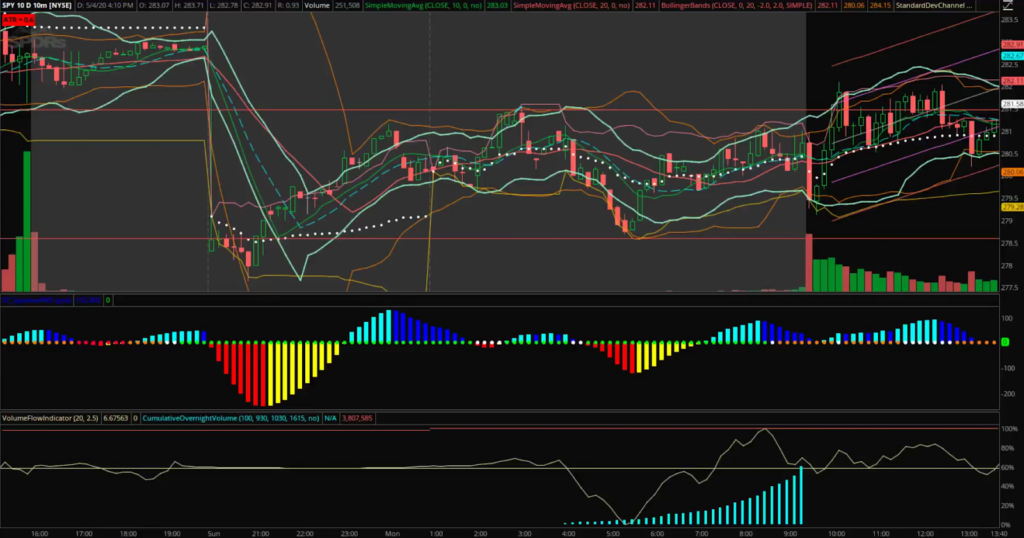 To be honest, a gap fill and reversal was probably the first trade that came to mind when looking at this chart pattern all pre market and in the morning hours.

And this led to the trade announcement

So to avoid being caught on the wrong side of the trade it’s important to watch what could happen in the first 30 minutes to 1 hour of the trading day.

What does this mean?

That means it’s best to watch the 1 hour day range to pick a direction the market is going to head in.

To find the hour breakout levels, you want to take the trading range seen In the first hour of the trading day.

Setting Up For A Trade

Once those levels are set, you would want to use them as the breakout to determine the direction the market is wanting to head in.

And if the stock stays inside that one hour range, it’s considered to be a choppy market.  In this case, not trading is the best way to go.

Then around 3pm, the range broke.

And you can see right at the breakout momentum kicked in and took the markets higher until the closing bell.

So… when the break above the 1 hour range occurred, you were left with 2 choices.

Things are starting to get a big choppy and direction is uncertain.

As the quarterback of your own trading account and you are responsible for the trading activity that is laid out by your offensive coordinator, or your strategy rulebook.

For example:  On 5/4 towards the end of the day, a signal occurred at 2:30 pm signaling a long market trade.  This signal came from a 1 hour range breakout.  The pattern also showed a breaking of the 60 min trading range and a release of the squeeze on the 10-minute chart.

But at that point, we already set up the trade to be a short trade.

You can do two things at this point: 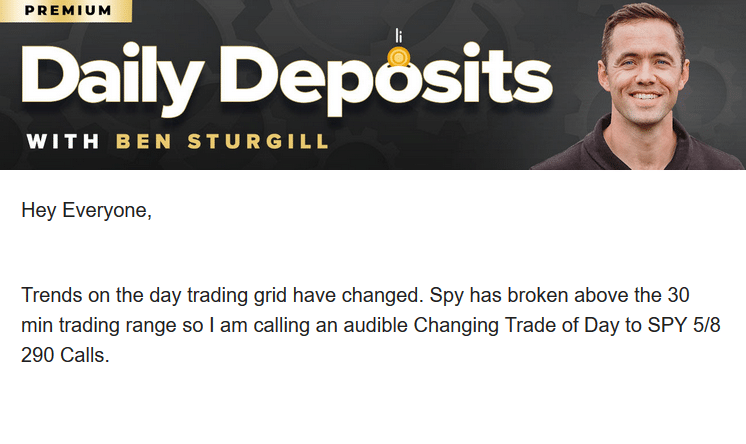 So as the services expand and evolve at Daily Deposits, new ways to make money with the system will be introduced.

And one of the news ways is how the trade of the day was able to be transformed into an opposite trade, or audible trade to stay in the game and off the sidelines.

And it’s always key to remember that just sometimes things don’t go according to plan.

And when something goes south fast, it’s best to change plans quickly.  But no matter what you do, you might just end up losing on the trade and that’s ok too.

Just don’t let it fool you, hearing some people call this indecision or confusion, but I call it reading the field and knowing how to place trades in changing market environments.

Think of it like a quarterback in the NFL… if they read the field and see defenses lining up in an unexpected pattern,  they will call an audible and get back on the right side of the play.

And that’s how it goes with trading.