It’s no mystery by now that Chinese stocks were under increased pressure under the current administration.

Trade wars and expanded regulations on Chinese companies conducting IPOs led to an increased risk factor when trying to get long on them.

Many of them have been shut out from listing on the Nasdaq— unless they were able to raise at least $25M in their IPO, or over a quarter of their post-listing market cap.

IQIYI Inc. (IQIYI) still serves as a dark and chilling example of the dangerous journey that many young Chinese stocks undertake on U.S. exchanges.

Known as the “Netflix of China,” IQIYI saw shares tank by 12% after SEC investigations began investigating its alleged inflation of financial numbers.

That happened not long after China’s Luckin Coffee, the “Starbucks of China,” was charged with similar allegations, forcing the chairman to resign.

That said, China is just too big to ignore. And for those who missed out on the IPO of hot U.S. brands like Netflix or Tesla, Chinese copycats give investors a second chance.

In fact, Chinese stocks have been showing strength in the past couple of weeks. International stocks as a whole gained 4% last week, as compared with 2.2% for U.S. equities.

Today, I want to share 3 U.S. listed Chinese IPOs that are offering attractive setups in the current market environment. 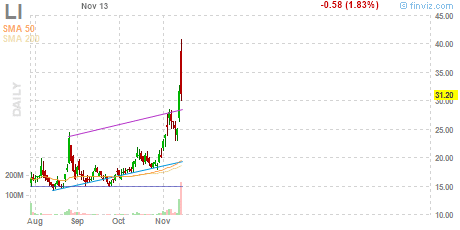 I’m expecting to see some big Chinese IPO trading opportunities coming up, given that a new presidential administration could take a softer tone towards Chinese IPO regulation.

Of course, IPOs are on a tear in general this year. The Renaissance IPO ETF is up over 80% year-to-date.That’s over 9 times the growth of the S&P 500!

Take advantage of my special quarterly price, with no long-term obligation, to test drive IPO Payday for the next 3 months.